Do you remember Edward II, the king’s inept son in the movie Braveheart? He was so unfit for war that he had to be replaced by his wife, Isabelle de France (Sophie Marceau) in the first negotiations with the Scottish rebels headed by William Wallace (Mel Gibson). Now, what does it have to do with Oltrepò pavese? Read on and you’ll soon learn.

In the heart of the Oltrepò pavese, precisely in the Hermitage of Saint’Albert of Butrio, there is an ancient sarcophagus carved in the stone that lies, empty, under an arch in the remains of the cloister. The friars of the hermitage and the oral tradition of the area claim that the empty grave was the original tomb of Edward II Plantagenet, king of England. Just a kids’ tale?.

My grandfather told me, when we went together to the Hermitage, that a king was buried here!

Said Mariarosa Gatti, CEO of “I Viaggi di Tels” whom we met during an upgrading course on marketing for tourism (incidentally: the same course that seeded the idea of the name “Oltrella Country House”). 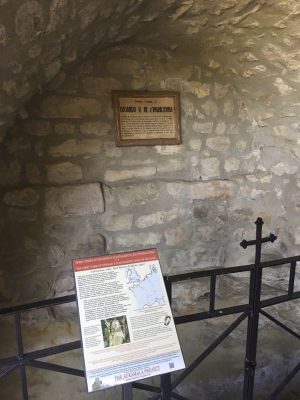 One day Mariarosa came to class and proudly announced that new research (to which she contributed) proved her grandfather’s tale to be correct, and that a novel based on it was to be published the following june (2016) by Piemme, written by a friend of hers, the australian Ivan Fowler.

It was the first time we heard about this story. An English king, albeit so controversial, really spent a few years of his life in Oltrepò pavese?

Obviously we were fascinated and curious, and we found more information in the project’s blog, theauramalaproject.wordpress.com.

The Auramala Project involves historians, geneticists and genealogists in Italy, England and the USA, seeking to solve the mystery of King Edward II of England in Italy.

We found out that the project was born almost as a game, and with time and passion it slowly turned into a crowd-research with the ambition to rewrite a page of history from below.

Coordinated by the cultural association “The World of Tels”, the project team focused on research and study of ancient documents and correspondence in museums and archives, and then expanded by including new sources and interviewing new experts, until they got in touch with two prominent British historians, Ian Mortimer and Kathryn Warner.

The project blog explains in this post the subject of the contention:

The crux of it is this: contemporary chronicles from England, and all over Europe, state that Edward II died in 1327, probably murdered in Berkeley Castle. As time passed after his death, the chronicles embroidered the story with more and more layers of interpretation. However, against this there exist a number of pieces of evidence (summarized and discussed here, here, here, here and here (just for a start) on Kathryn Warner’s blog) that indicate Edward II did not indeed die. These include a letter written by the Archbishop of York of the time, William Melton, addressed to the then mayor of London, and a letter (the Fieschi Letter) purported to be written by a papal notary (who later became bishop), which appears to be addressed to Edward III himself. Other contemporary events cast doubt on the death of Edward II, such as a plot to free him from captivity when he was supposedly long dead.

Kathryn Warner, by the way, visited Pavia in September 2015 to present her book “Edward II, The Unconventional King”, a biography of the King written in English. In that occasion she released an interview an interview with La Provincia Pavese, in which she agreed with many of the doubts expressed by the team of The Auramala Project.

The findings of the research and the deepening of the knowledge of Edward II and his time have inspired Ivan Fowler to publish a novel with the background facts based on documentary evidence and a plot (and some of the characters) created from pure imagination.

The novel’s presentation was made on June 26, 2016 at the Castle of Oramala. A perfect venue to introduce a medieval story like Edward’s. After meeting Mariarosa and hearing the story of one of the oldest “cold cases” in history, we decided we could not miss the presentation.