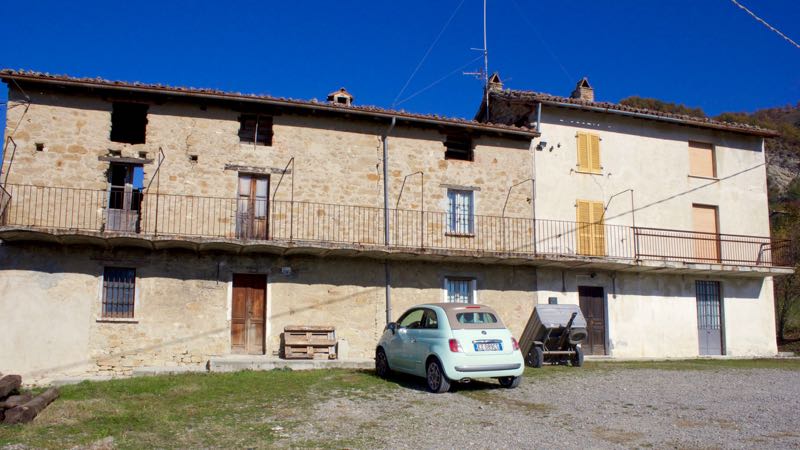 Before the House became ours, we noticed during our visits that it appeared very well-preserved, partly in its original state, partly rebuilt and renovated around the seventies. Unlike other ruins in the neighborhood it was not abandoned and was called “Hunting Lodge Guardamonte“, headquarters to the homonymous team of hunters who gathered here.

As I said before, we concluded the purchase of the House in the autumn of 2015, but we agreed to let the hunters have the keys to the ground floor rooms until the end of the year, so that they could use the hunting lodge for the rest of the season.

During the second half of 2015, therefore, we sometimes went to visit the house to check that everything was in order.

The interiors of the hunting lodge appeared in fact as a house of parties and banquets. In two of the rooms on the

ground floor, the newer ones, long L-shaped tables were arranged, covered with plastic tablecloths decorated with fruity patterns . In the older rooms were the piles of wood that fueled the stoves. Hanging on the walls here and there, you could see group photos of the Guardamonte team and the inevitable boar heads exhibited as trophies. In the air the strong scent of wood burned and game meals.

In December 2015, hunters were finally to transfer their colorful tables, stoves, pictures and trophies to the new premises they had established in a village nearby. It happened so that during one of our visits we met

two of the hunters picking up their last things. Of course we introduced ourselves and the introduction soon became a brief conversation.

One of the hunters told us: “The land of this area is unique and is famous for building stone: all the stones that are found here always have a smooth side and are perfect to build.”

And then: “In this house I spent many Sundays in the company of relatives and friends, as a boy, in summer as in winter. I have many fond memories of this place, you know, I grew up here. The view enjoyed by this house is nowhere to be found. I will really miss it. ”

How to blame him? The secluded place and breadth of views we enjoy here, convey feelings that are difficult to express in a photograph. You have to come in person to understand.